Get a free recipe
Subscribe
A Bun That Can Be Anything, Go Anywhere
By: Shayne Chammavanijakul 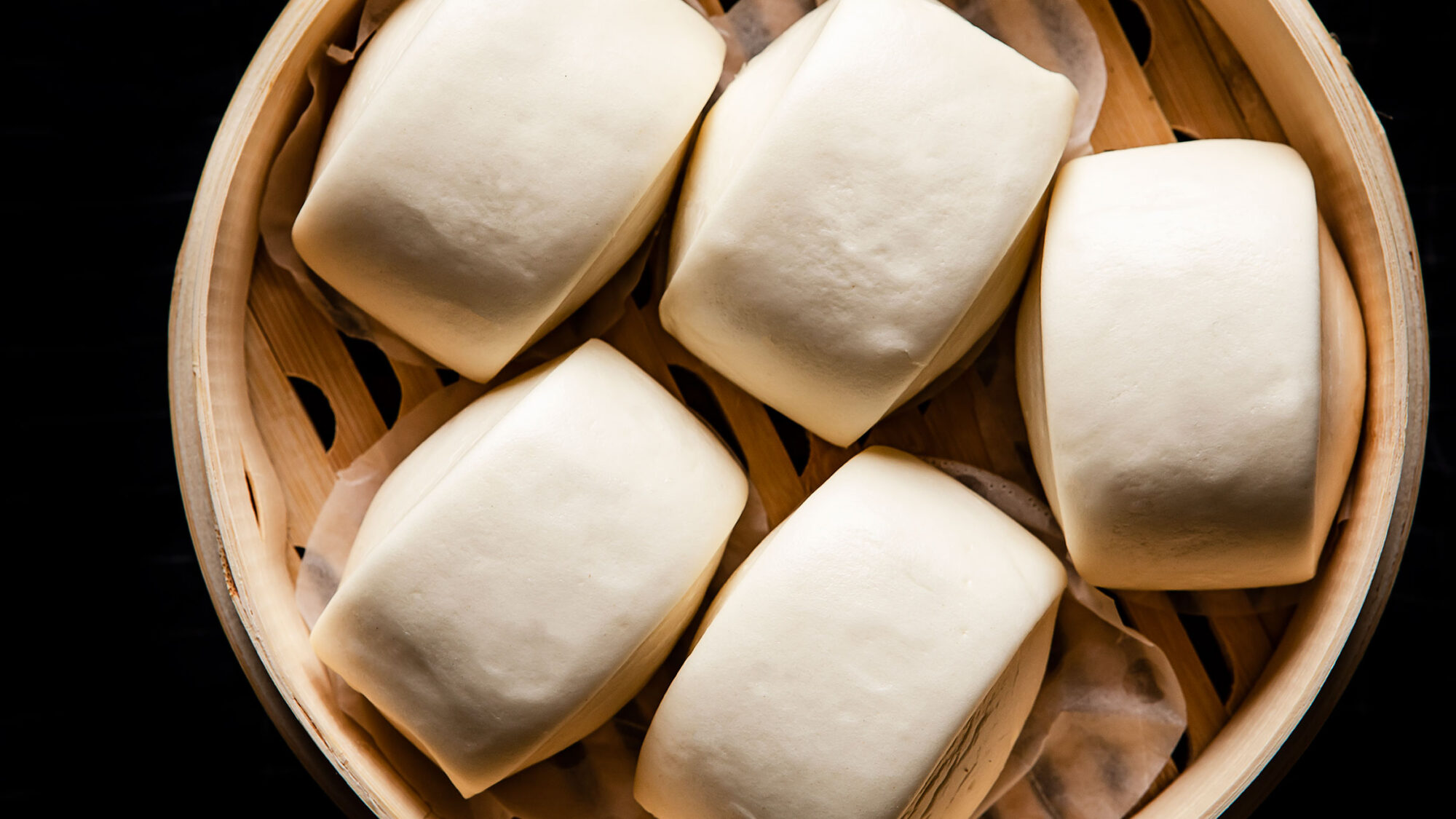 Soft, light, and faintly sweet, mantou are perfect for filling with savory pork belly or just snacking on straight from the steamer.

“I have a riddle for you,” my little cousin said to me, an impish gleam in her eyes. I held my breath as my extended family, all gathered around a lunch table at our favorite dim sum restaurant in Bangkok, quieted down and leaned in to listen.

It must’ve been, no doubt, one of the many Thai equivalents of the why-did-the-chicken-cross-the-road joke that I’d been on the receiving end of before. A five-second pause was too long for the third-grader; she grabbed a round, white, fluffy bun out of one of the many bamboo baskets on the table and placed it in front of me. “It’s salapao! Salapao is what’s on the paper!”

Of course. In Thailand, where I’ve visited extended family many times over the years from my home in Chicago, Chinese steamed buns arrive sitting atop a small square of wax paper that keeps it from sticking to the steamer basket as it’s cooked. My cousin gleefully informed me that she had another riddle. “What’s under the paper?” She didn’t even wait for my answer this time. “An upside-down salapao!” Everyone burst out laughing, but it’d be days before I came to fully understand why it was funny.

Even if the humor of my cousin’s riddle didn’t translate so well, the featured food does, in many cultures around the world. Showing up as siopao in the Philippines, salapao in Thailand, manapua in Hawaii, and under many other names elsewhere, Chinese steamed buns have traveled far and wide to places touched by the cuisines of China, crossing cultures and languages. They’ve done so with ease, too, because what’s not to like? Soft, round, light, and faintly sweet, these buns are the dinner rolls of your dreams, the kind you demolish the moment a basket of them is placed before you at the restaurant—and yet you still have the appetite to enjoy more of them alongside the main course once it arrives. Mantou dough—just like a typical dinner roll dough—is a simple mix of medium-protein wheat flour, yeast, sugar, salt, and water. It’s the perfect project for a lazy weekend, when you can relax while the dough rises and the duck roasts in the oven or the pork belly simmers away on the stove.

My Hakka Chinese grandparents in Thailand make them fresh almost daily to eat with hot jasmine tea for breakfast. Seattle-based Hsiao-Ching Chou, author of Chinese Soul Food, recalls memories of her mother deep-frying mantou until golden and crisp for her to enjoy as a snack. “We didn’t have Pop-Tarts,” she says, “we had mantou.” Fuchsia Dunlop, author of The Food of Sichuan, as well as other books on Chinese cuisine, cuts an oversize mantou into slices and eats it spread with soft, pasty, and salty Chinese fermented tofu. “A bit like English anchovy toast,” she says.

The yeasted buns are sturdy and accommodating enough to be served with a large array of flavorful fillings. Once you master the dough and the steaming method—both of which are easy—you have at your disposal a variety of incarnations. In Thailand, mantou is a classic accompaniment for braised pork knuckles seasoned with soy sauce and five-spice powder, kha mu, in the manner of pot roast and dinner rolls. (When they’re filled—most often with ground pork seasoned with the herbaceous and peppery Thai aromatic paste of garlic, peppercorns, and cilantro roots—they’re called “salapao.”) Rolled flat into an oval and steamed loosely folded in half, these buns are the essential part of Taiwanese gua bao, typically served with fragrant braised pork belly nestled in their fold. Lightly oiled, dotted with chopped green onions, and coiled into flower-shaped rolls, they become savory hua juan.

If you were to ask me what you can fill these buns with, I’d ask you right back how much time you have. Classic fillings include Chinese barbecued pork, rousong (also known as “pork floss”), sweetened bean paste, and sweet custard, among many others. More modern fillings fueling global culinary trends include sweet and milky Thai tea custard and pandan (aka, the vanilla of Southeast Asia) that ooze out when you bite into a bun—hence the moniker “lava.” Golden Steamer, a small Chinese bakery in New York City, fills their buns with pumpkin, egg custard, and salted egg. Waraporn Salapao in Bangkok not only makes salapao filled with taro paste and gingko nuts, but also serves mantou with pandan custard cream or sweetened condensed milk on the side.

Walk down the freezer aisle of major supermarkets in Asia, and you’ll find packages of heat-and-serve buns made by various manufacturers, often with nontraditional fillings like cream cheese or ham and cheese. Iterations featuring Western flavor combinations, which have become more common in Asia, can be found stateside as well—like California-based Harumama’s steamed buns with Nutella or strawberries and cream, for example. The versatility of mantou cannot be overstated. Having a handle on the basic dough is a gateway into a vast array of creations, and the world, as they say, truly becomes your oyster—speaking of which, I can testify that deep-fried oysters in the style of the classic New Orleans po’ boys are delicious on these Chinese steamed buns.

Shayne Chammavanijakul is the founder of Dill Magazine. She lives in Chicago.