Get a free recipe
Subscribe
The 8 Stages of Trying to Eat Everything in My CSA Share
By: Liza Corsillo 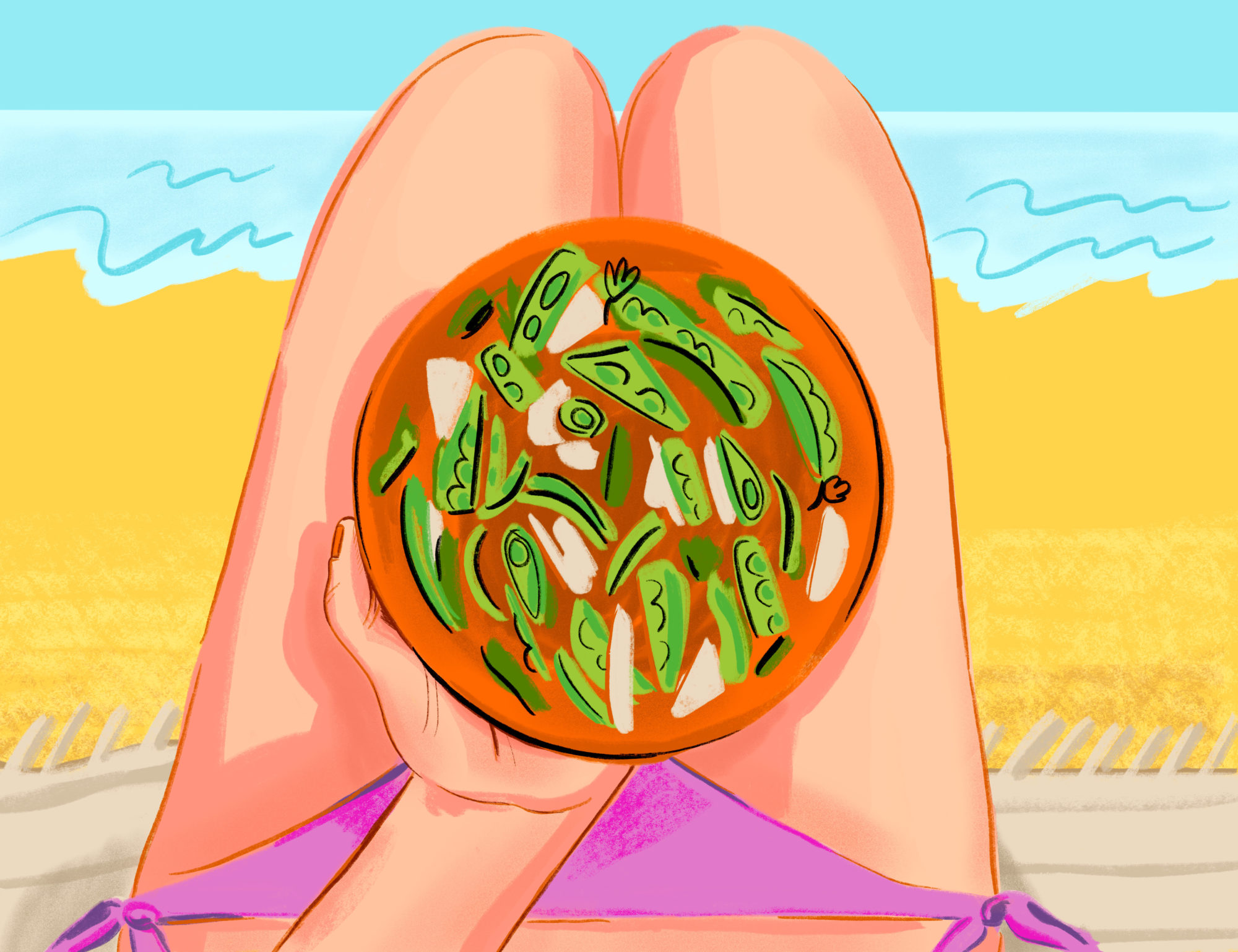 CSA shares always sound like a good idea in theory. In practice, they can be a complicated cocktail of pride and shame.

Commiting to a summer CSA has taken me longer than it should. A CSA, which stands for “community-supported agriculture,” usually works as a subscription model where a local farm will dole out weekly mixed boxes of whatever’s being harvested at the moment. As a single person in my late 20s whose refrigerator was still being divided between roommates, a weekly influx of unpredictable produce always struck me as overwhelming. But now that I’m armed with my own apartment and a partner to share the cooking with, I finally have the foundation for a steady stream of farm-to-Brooklyn vegetables.

This June, with my typical eyes-bigger-than-my-stomach optimism, I excitedly forked over a few hundred bucks toward my first summer-long subscription. Unsurprisingly, the weekly haul has brought me equal parts joy and guilt. While lining up greens across my kitchen counter, I feel like a duchess or Chrissy Teigen: Fruit and vegetable abundance has always made me feel rich—just ask my mother. But the joy is swiftly followed by shame when each week, I struggle to finish all the food and end up adding wholly untouched heads of escarole and rotten beans to the growing mound of compost in my freezer. Planning meals and sticking to the plan isn’t easy when you live in a place with access to every kind of takeout imaginable. So in a renewed effort, midway through the summer, to waste less and satisfy my competitive ego, I challenged myself to eat everything given to me for at least one week. I got creative, consulted the Internet, packed a lunch, cheated a little, and tried really hard not to throw anything away (beet greens included).

Pickup: Leading into Saturday, my inbox filled up with pleas from fellow members looking for help grabbing their share while they were away. If I knew offloading some of the responsibility on my neighbors was an option, I would’ve joined a CSA earlier. I ignored all the emails, making me feel undeservingly superior and optimistic about the week. On Saturday morning, I recited my new mantra: I will commit; I am fully capable of not eating out; my kitchen is enough for me; food waste is for trash people. The vegetables are distributed out of a preschool; everything is wholesome and good. My no-waste-challenge share included garlic scapes, sugar snap peas, butter lettuce, Swiss chard, snow peas, and beets—let’s f*cking go. Ambition: My first thought was to use the sugar snap peas to make a chilled pea soup similar to what Italian heiresses probably eat at a glass table under olive trees. I looked it up and saw that it’s made with olive oil, mint, a touch of sea salt, cayenne pepper, and crème fraîche. Easy, I thought, ignoring the part of the recipe that involves a fine mesh strainer. I then imagined the most beautiful bright purple beet hummus and the most delicate plate of scallops and wilted butter lettuce. I wanted to tweet “Being a chef is easy,” but thankfully I held off.

Partial Failure: Unfortunately, the peas made a perfect hot-weather snack, and before long I had eaten them all. Soup was off, at least until later in the week, when I could go shopping and reattempt the recipe. Not wanting to use chicken stock (the BF is a vegetarian), and not owning a fine mesh strainer (shame on me), my soup was tasty but also pretty similar to a green smoothie. Storage: By Tuesday, the Swiss chard had started to wilt, and I was scolded for my poor choice of fridge placement. My boyfriend is a devout believer in the crisper drawer; I am lazy. He explained his very elaborate and very effective technique of wrapping greens in a wet paper towel and placing them in the drawer. To my credit I remembered that vegetables are plants (like flowers!), so I cut the stems on a diagonal and stuck the whole sad bunch in a jar of water. This made the chard perk up and earned me an extra day.

Malaise: On Wednesday I was feeling lazy because of the heat. All I wanted was something quick and preferably covered in cheese. Compromise: Instead of giving in to nachos or pizza, I did the easiest thing I could think of to make a dent in the veg: simple pasta with garlic, olive oil, Parmesan, sautéed chard, and beet greens. The following day I had a lunch of caprese lettuce cups (butter lettuce leaves topped with basil, mozzarella, tomatoes, salt, and a drizzle of olive oil) and ate them standing up alone in my kitchen.

Pride: On Friday I roasted the beets and several heads of garlic for hummus. Once blended to perfection, I added sautéed garlic scapes on top and shaved almonds around the edges as garnish. This was my proudest moment all week: The hummus was hearty but not heavy, and it looked really good on my Instagram stories. Mom-Level Meal Prep: The next day, after picking up a new week’s share, I packed the last of the previous week’s work in Tupperware for a trip to the beach: fresh snap pea salad with mint, pecorino, olive oil, lemon, salt, and pepper. While everyone else at Fort Tilden chomped down on French fries and overpriced tacos, my crew enjoyed the fragrant crunch of snap peas and mint. My heart swelled like a mom delivering orange slices to her child’s middle-school soccer team, even though my “kids” were a handful of thirtysomething men arguing over the environmental impact of sheetrock versus timber.

Getting through everything before it went bad was embarrassingly difficult. I’m still adjusting to cooking based on what I have rather than basing all my meals on a whim. It’s made me a better and healthier cook. In that way, I guess, I can say I did right by the CSA.

Liza Corsillo is a writer and illustrator living in Brooklyn, NY. She was previously a staff writer at GQ and has contributed to GQStyle, Men's Journal, Men’s Fitness, New York Magazine, and The Strategist.