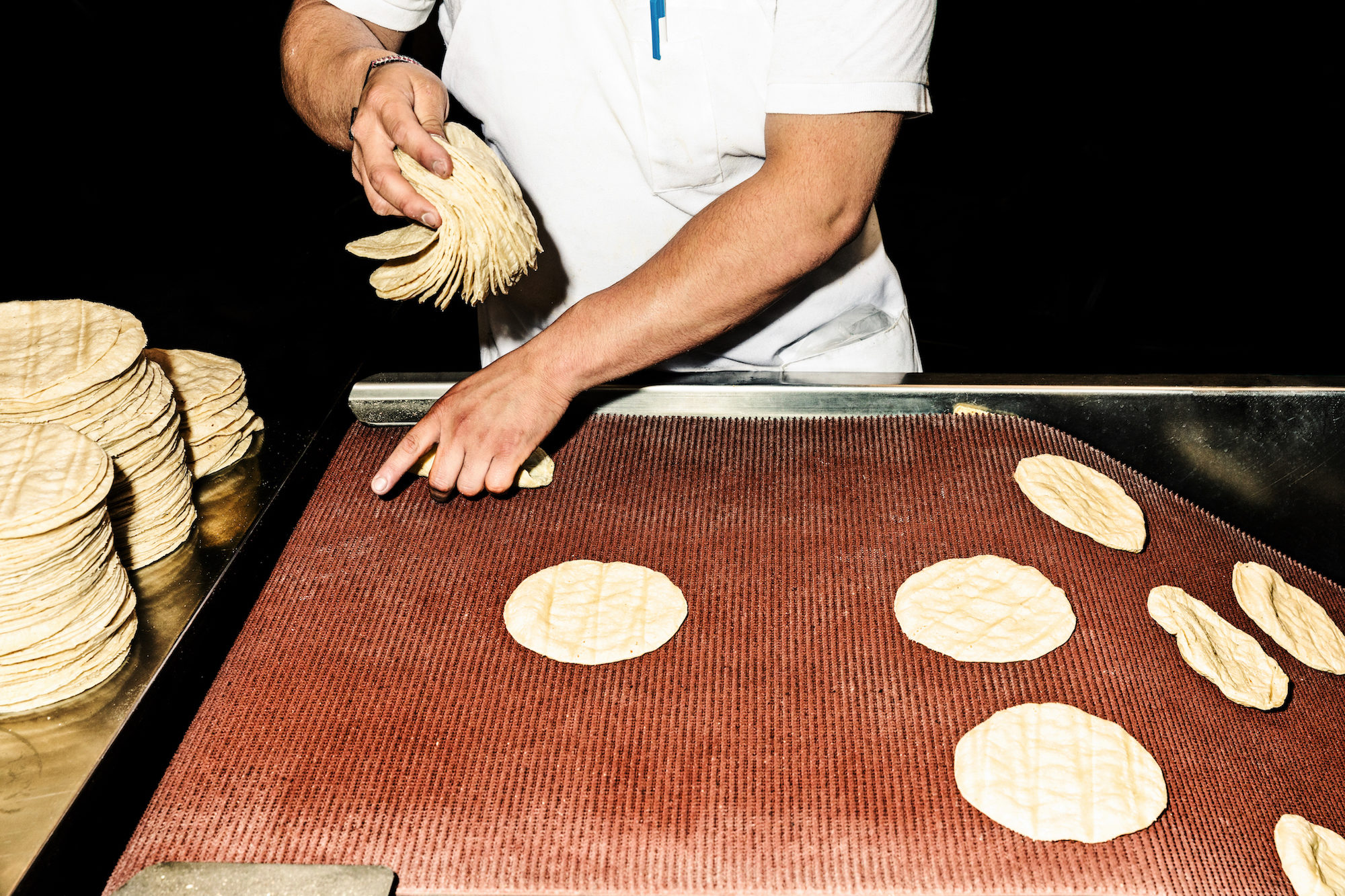 For the people who grew up with them, Mexican markets are the unsung heroes of California’s grocery ecosystem. My family lived below the poverty line for the entirety of my childhood, but because of the Pico Rivera Northgate González market in southeastern Los Angeles, we never went hungry. We could get four bolillos and four avocados for $2—essentially avocado toast before it was a thing. Add a package of Mexican chorizo, a couple dozen eggs, and a few potatoes to the shopping cart, and we were set for under 10 bucks. For a long time, I didn’t know we were poor because we ate so well. Mexican-owned markets are now so prevalent across the state that they’re easy to take for granted. Walk into any number of them, and you’ll find tortillas that were bagged warm, bins of jicama, and carnicería options that range from whole mojarra to packed containers of tripe—all for affordable prices. But there was a time when these markets were few and far between, and during the 1990s, their sudden and remarkable rise was a saving grace to those who came as part of one of the largest waves of immigration to the United States.

The number of Mexican immigrants coming to the U.S., both with and without authorization, exploded in the 1990s, hitting a peak at the end of the decade. A well-stocked Mexican market was so fundamental to newly arrived immigrant families like Layidua Salazar’s that she characterizes her childhood in the United States in the ’90s as “before the market and after the market.”

“You have to understand that at chain grocery stores at the time, you couldn’t even find tortillas.”

“Before we started going to [a Mexican market], we’d make a list of things we needed or wanted when we knew family was coming from Mexico. After we started going to the market, that shifted because now we had access to everything we used to ask for,” Salazar said. Salazar’s family migrated to Oakland, California, from Guadalajara, Mexico, in 1991. In the city’s Fruitvale neighborhood, where Salazar’s family settled, there was already an emerging Mexican community, but most were from Northern Mexico. Salazar recalls feeling untethered.

“You have to understand that at chain grocery stores at the time, you couldn’t even find tortillas,” Salazar recalls. “I came from a suburban area of Guadalajara where my siblings and I would walk to the tortilleria to get tortillas for my mom for dinner. Coming to the U.S. just felt like a huge loss of community.”

“In the ’90s there were a lot of stories about workplace raids, sometimes at American grocery stores, so shopping at a place surrounded by community also felt safer.”

Then her family discovered the Hernandez Meat Market. When the carnicería was opened in 1986 by Rafael Hernandez, a Mexican immigrant who came to the U.S. in the late 1970s, it was one of just three carnicerías in Fruitvale, a now predominantly Latino area dotted with more Mexican markets than you could visit in a day. “It felt distinctly different than walking into an American grocery store, and not just because the food felt like home,” Salazar said. “In the ’90s there were a lot of stories about workplace raids, sometimes at American grocery stores, so shopping at a place surrounded by community also felt safer.”

Grocery store “ethnic aisles”—where you can find jars of mole and bags of dried chiles—and “Latino markets,” known for their extensive and affordable produce sections, are now relatively commonplace nationwide, as are carnicerías, which can be found in even the most rural Southern towns. But in the 1990s, a place like Hernandez Meat Market was a rarity and a beacon, giving newly arrived Mexican immigrants access to ingredients for mole, birria, and pambazos. These markets also provided a needed dose of community, kinship, and immigrant-friendly bilingual services, like wire transfers, prepaid calling cards, and check cashing that didn’t include the predatory interest rate offered by American chains that targeted low-income communities of color.

The boom of Mexican-owned markets in the 1990s correlated with an uptick in Mexican migration to the state. Because of its proximity to the border, Southern California first saw the Mexican market trend begin in the 1980s. As Gustavo Arellano reported for L.A. Taco, this is when now-giant chains like Northgate González first emerged “at the forefront of a wave of Latino supermarket chains that spread across Southern California during the 1980s, nearly all run by immigrants from Jalisco.” This includes Vallarta Market, which, like Northgate González, also began to open multiple Southern California locations in the 1990s to serve the growing Mexican community. The increase in Mexican migration to the U.S. in the 1990s is often attributed to the rapid economic growth and job expansion in the U.S., but the truth is that it was actually the signing of the North American Free Trade Agreement (NAFTA) in 1993. The trade pact between the U.S., Canada, and Mexico was intended to make it easier for companies in the three countries to move goods and supplies across North America’s borders. But when NAFTA went into force in 1994, the agreement caused irreparable harm to Mexico, including a decline in wages, a rise in unemployment, and the loss of around 2 million farmers, who were forced to compete in their own market without subsidies against large U.S. producers with corn subsidized by the United States. Pork farmers were also hit hard and largely driven out of the market by U.S. imports.

Even before NAFTA, Americans expressed their distaste for Mexican migration, and this ramped up after the pact went into effect. This was especially true in California. In 1994, the state passed an anti-immigrant law that attempted to block undocumented children from accessing public education and promised to funnel families in the U.S. without authorization into deportation proceedings. The Mexican president at the time, Carlos Salinas de Gortari, took it upon himself to tour the United States, telling Americans that NAFTA would reduce migration by providing employment for Mexicans in Mexico. Instead, it became a primary reason Mexicans migrated to the U.S. Beto Chavez’s family did not come to the U.S. as a result of NAFTA, but he says it is certainly the reason why some of his customers migrated. Chavez is the general manager of Chavez Supermarkets and the son of the Bay Area chain’s founder, David Chavez.

In 1984, Chavez’s father, who had migrated to the U.S. in the 1970s, launched Chavez Meat Market in Redwood City on the San Francisco peninsula. The carnicería and taqueria remained the core of the business when the second store opened in 1993, and eventually, the business morphed into Chavez Supermarkets, growing to four stores by 2001; it now has 10 locations across the Bay Area. Chavez said you can actually trace the growth of the Bay Area’s Mexican community through the expansion of his family’s supermarkets.

“My dad followed the patterns of his customers in the Bay Area, but our growth and the locations of our stores were also shaped by our own family history,” Chavez recalls.

In a way, Chavez’s father decided to offer his community what he couldn’t find when he first arrived in the Bay Area. Members of the Chavez family still recall with horror the time when tamale season arrived and there was nowhere to buy masa. Now you can find Maseca—a popular commercial brand of instant masa—at Walmart.

Hernandez Meat Market linked Salazar to Mexico, a country she cannot return to as an undocumented immigrant.

“Initially, immigration from Mexico was an important factor in our success, but now we’re catering to the second and third generation,” says Chavez. “You can find Mexican ingredients everywhere now, but it’s not quite the same. They don’t offer the same authenticity as Mexican markets. People will always look for the traditional, authentic items they grew up on, and they know that we will have the galletas María, Jarritos soda, and the same cuts of meat we’ve been selling for years. I think that’s comforting to people or gives them a sense of nostalgia.” Hernandez Meat Market linked Salazar to Mexico, a country she cannot return to as an undocumented immigrant. Food became—and continues to be—a cultural connection to her country of origin. In America, bringing a significant other home to meet the family tends to conjure images of the father, standing at the head of the table, carving a turkey or a ham for the holiday meal. Salazar says at her house it was her father slicing a cow tongue from Hernandez Meat Market “on a random Tuesday.”

“I assimilated to American culture, but our home was Mexico, and food was central to that,” Salazar says. “[Hernandez Market] was of the utmost importance for passing traditions on, for passing our culture on. When you’re a kid, it can seem like you’re just watching your mom make salsa, but as an adult you know it’s more than that.” Hernandez says that when he first opened his carnicería, he saw it as a business, a way to apply the trade he learned when he first moved to the United States and worked at a meat market in the Mission District. But once the business opened its doors, he quickly understood that the success of his business was deeply tied to migration, and he saw the difference his market made in the lives of newly arrived Mexican families like Salazar’s.

“All of the market owners, not just me, try to give our customers that joy of tasting the flavors and traditions that make them feel most at home among their people,” Hernandez says of the prepared meats they marinate and season in-house. “I would say our customers feel at home when they come [to our market]. That is very important to me, and beyond that, anything I can do to help and serve my community, I will do that.”

Sometimes it was the nuances of the market that brought Salazar great comfort. The sight of a whole pig head in the carnicería was something she instinctively knew she would never see at a Safeway, and she delighted in it. It was also the absence of American products, like Hershey’s chocolate, in favor of Paleta Payaso or a Bubu Lubu. Mexican-owned markets are now expanding to meet the needs of another growing immigrant population: Central Americans. Chavez’s stores, for example, now offer Salvadoran staples like pupusas, loroco, and frijol rojo de seda, along with all things Goya—a company that has come to specialize in items from “other than Mexico” Latin America, including Colombia and Venezuela.

Salazar finds comfort in this, too, understanding that food is an essential part of Latinx culture and community. Having access to your traditional foods is important, she said, and she wants that for other immigrants.

“Imagine being perpetually homesick and not being able to return home. That’s what it’s like for a lot of us [who are undocumented],” Salazar said. “Being able to experience just a little taste of home can go a long way. When I’m going through another difficult period in my immigration case, I find myself going to my parents’ house more to eat with them. It’s made it very clear to me that food is a way to feel and stay connected.”

Tina Vasquez is an award-winning journalist based in North Carolina, where she writes full-time about the U.S. immigration system.