Get a free recipe
Subscribe
100 Cups of Tea in Kashmir
By: Sharanya Deepak 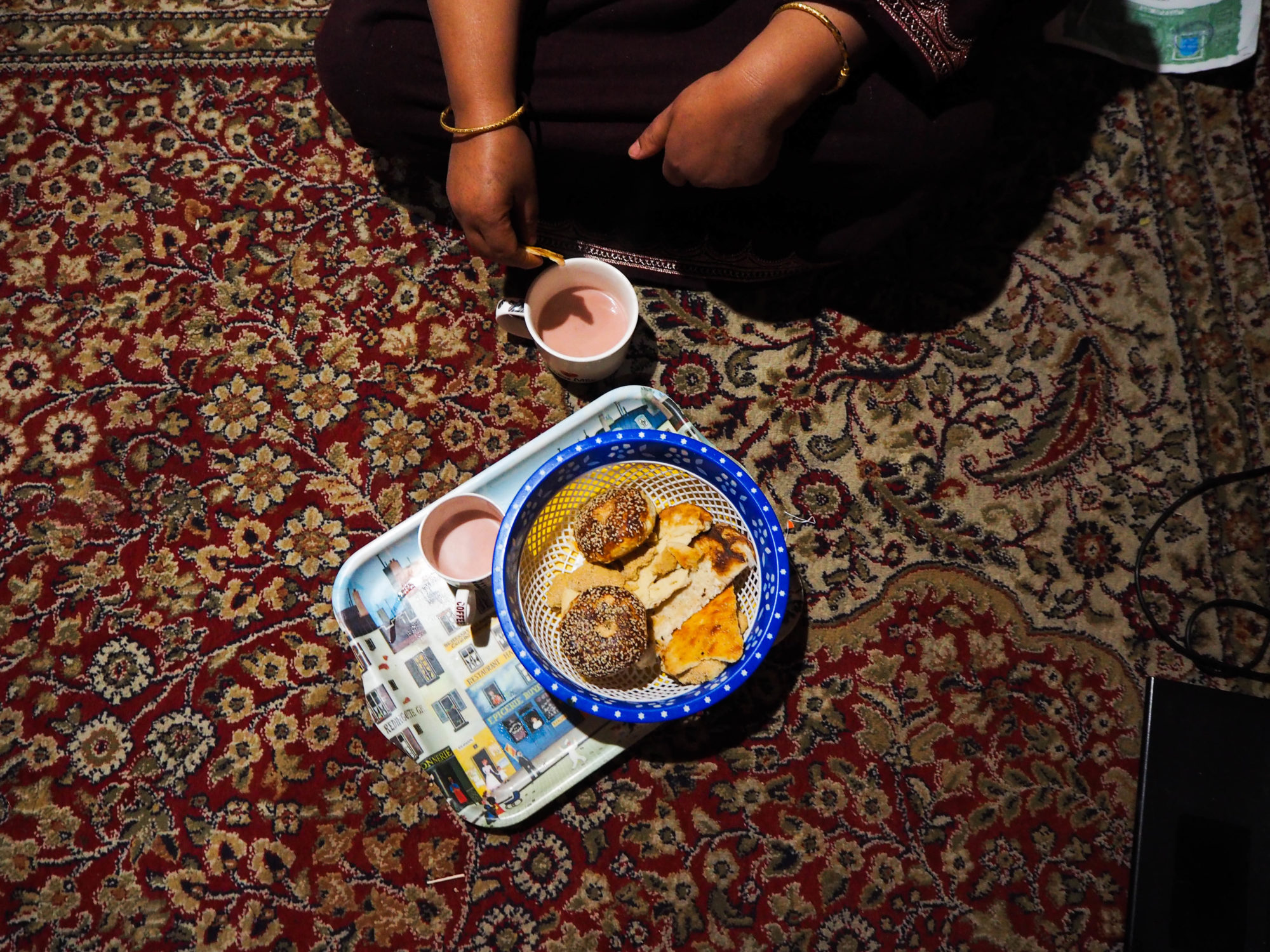 In one of the most militarized regions in the world, tea is both a daily celebration and an everyday struggle.

“I have made a big mistake,” says Fehmida Malik, my friend in Srinagar. As I enter her kitchen on a sunny May morning, she looks graver than I’ve ever seen her. “A big mistake,” she repeats. “I have no bread for chai.”

As if on cue, she hands me 100 rupees and sends me off to the kanduru, or neighborhood baker, close to her home. It is another day of curfew in Kashmir, and as the city closes in anticipation of potential violence, the blanketing silence everywhere is a reminder of the political turmoil. But at all costs, we must have bread for tea.

“They can fire guns, take men from their homes, keep women inside, close up Kashmir,” says Parvaiz Ahmad, the baker, as he hands me a stack of gaev tsot, a fresh, patterned flatbread smeared with ghee and sprinkled with sesame seeds. “But my tandoor isn’t going anywhere. People will always need to drink chai.” Parvaiz is referring to the Indian military, which has imposed complete rule on Kashmiris since 1990, leaving a string of human rights violations, encounter killings, and fear in their wake.

Historically celebrated for its rich intellectual culture and breathtaking scenery straight from a Bollywood feature, Kashmir, a region that straddles the border between India and Pakistan, is known today for being the most militarized region in the world. Aside from its occupation, it was the site of war between India and Pakistan in 1947, 1965, and 1999. Curfew is a weekly occurrence in Kashmir: As a sign of protest, the city shuts down every Friday, or to acknowledge the death anniversaries of those martyred in the struggle. Out of fear or habit, people stay inside their homes, but even so, Parvaiz says, tea remains a constant. Last month, Shujaat Bukhari, the beloved editor of the paper Rising Kashmir, was assassinated in Srinagar in broad daylight. Following that, the coalition government collapsed, and as people took to the streets in protest, army rifles crackled, and the conflict took a fresh turn in the region of 12.55 million people.

When I return, Fehmida is relieved to see fresh loaves of gaev tsot in my hands and brings out cups of pale pink, deeply salty noon-chai. “Noon” is the Persian word for salt, and the drink, which has its origins in Uzbekistan, is made by boiling tea and sodium bicarbonate in water and then adding milk and salt. While the pinkness is evocative of the landscapes and skies that surround Kashmir, salt helps in keeping the drinker warm during the region’s gripping cold.

Though Kashmiris don’t grow tea—they import it all from Assam or Mumbai—they drink three kinds: the noon-chai, a Lipton tea, and the Kehwa. Noon-chai is the most ubiquitous, always found in Kashmiri homes, and always drunk with bread.

“The way the Gurjars and Bakarwals make it is richer, earthier than the milky version you get in homes,” says Chris Zandee, a local cheesemaker in Kashmir, of the tea brewed by region’s nomadic pastoralists. “That’s the one I like the best.” But just as “there is no one kind of Kashmiri,” he adds, “there is not one kind of noon-chai.” Fehmida and Asma break lavasa to dip in their noon-chai.

Apart from the gaev tsot that I bought from Ahmad, there are many breads served with tea: kulchas—dry, biscuit-like breads topped with sesame seeds and dunked whole in the tea; telovuru, the Kashmiri version of a bagel, topped with sesame and poppy; sheermal, a sweet, thinner bread glazed with egg white and sugar; lavasa, bread from the Middle East eaten at breakfast with an egg; Western imports, like vanilla cakes and ginger biscuits; and my favorite, the bakarkhani, a flaky rendition of a roti that is sometimes made with dry fruits but is often eaten smeared with homemade jams.

While noon-chai is almost always consumed in familiar places like the home or office while seated outdoors or on carpeted floors, Kashmiris drink other kinds of teas in different settings. The Lipton, or black tea, brought by the English when they they used the city as a summer getaway from New Delhi, is less rooted in local tradition and increasingly popular among younger Kashmiris.

“Lipton tea today is lingo for black tea, a regular chai, closer to how it’s drunk in other parts of the subcontinent,” says Hayat Bhat, one of the owners of Ahdoo’s, Srinagar’s best-known restaurant, as we drink an afternoon tea at his restaurant. “Today, it is drank widely outside homes, but it has always had a presence at Ahdoo’s.” Sheermal, a bread with a sugar and egg glaze, being made at Hema Malini, one of Kashmir’s famous traditional bakers

Ahdoo’s first opened as a small bakery in 1918, when Hayat’s grandfather, Ahad, fondly known as Ahdoo, was sent by Kashmir’s then king, Maharaja Hari Singh, to train in the art of British baking. When Ahad returned, it was as a skilled baker, creating cakes and meat-stuffed puffed pastries, that took the city by storm. For 100 years now, locals have streamed into the sprawling restaurant to eat a snack after sundown, but also, as everyone tells me, for the best chai and butter toast in Srinagar.

Ahdoo’s current incarnation opened in 1988, “the same year the first bomb went off in Kashmir,” says Hayat. “And then everything began to change.”

In the late 1980s, after Farooq Abdullah was elected chief minister of the state, an insurgency began, and bloodshed and violence became commonplace in the valley. In 1990, the armed forces open fired on civilians, killing more than 40 (today the number of dead in the conflict has grown to more than 14,000 civilians, 22,000 Kashmiri rebels, and 5,000 armed soldiers). In the communal violence that followed the occupation, Muslim separatists killed Hindu Kashmiri Pandits, resulting in a mass exodus of the community from the valley.

For a decade, an intense military crackdown and a consequential militancy grew in Kashmir, during which many hotels and restaurants closed in reaction to the violence. But Ahdoo’s remained open and became a spot where journalists, activists, protesters, and separatists all came to gather.

“‘Reporting from Ahdoo’s,’ they’d say, as violence took the city to ruin outside,” Hayat recalls. “Since this was where everyone was, this was the center of all those politics, all that tumult. A tea at the restaurant became the way people would reconcile with what was happening outside and often a way to find comfort away from it.”

“In the rest of the world, things happen over coffee, wine, beer,“ says Hayat as he leaves for his evening prayer. “In Kashmir, tea is central. Everything happens around tea.” The next day I drink tea with Shireen Inayetullah, who has lived and grown old in Srinagar, and she tells me the same thing. Shireen’s favorite tea is kehwa, a slow-brewed green tea infused with the region’s great pride — saffron. “Keh” is the Kashmiri word for 11, indicating the tea’s 11 ingredients, including walnuts, cardamom, and cinnamon. Kehwa is always brewed slowly (heating saffron quickly will make it bitter) in a large copper pot known as a samovar, and then garnished with chopped almonds. Its mix of spices and the addition of saffron makes the tea nothing short of intoxicating, and while kehwa is drunk in Afghanistan and some parts of central Asia, the slow brew and almond garnish are typical of Kashmir.

“Some people drink it with milk, others with shanger—or licorice—but a true kehwa is born when the saffron is allowed to blossom,” says Shireen as she gives me a plate of kulchas. “My grandmother used to take her own cup to people’s homes. ‘Kehwa must be drunk in the finest china,’ she used to say. ‘It must be treated with respect.’

“Even today, when we brew it in the house, everything is fragrant for hours,” Shireen says. “That sweet smell of saffron dripping from walls—there’s nothing else like it.” While kehwa was abundant in upper-middle-class families like Shireen’s, a “bed tea” drunk in the mornings, the high cost of saffron doesn’t allow for the tea to be an everyday treat for most families. Kehwa is reserved for special occasions — weddings, birthdays, even funerals, and Kehyam — a ritual named for and revolving around the tea. In a Kehyam, a family partakes in mourning. Not a death, but an event that brings grief— a sick family member, a failed marriage, or a young man leaving to join the military.

“Kehwa is brewed to its best and shared with neighbors as if to say, ‘We are in a bad time, but we will get through,’” says Basit Malik of the age-old practice. “The tea becomes a a way to communicate something other than the ordinary.”

“In Delhi, the smells of the kehwa would bring us back to the valley,” says Alok Ganju, a Kashmiri pandit who lives in Bangalore. “It would bring Kashmir a little closer.” During my three weeks in Kashmir, I drank more than 100 cups of tea, each one loaded with meaning and accompanied by an extensive array of snacks. As years go by, the violence and grief in the valley becomes more erratic but stays omnipresent, and the presence of the military creates a culture of claustrophobia. People are gagged with grief from mourning their dead, and a divisive and looming uncertainty governs each passing day. But as Kashmiris battle this fragility, the smells of kehwa, the warmth of freshly made bread, and the simple comfort of noon-chai with a slice of cake lets them preserve their traditions, reminds them of the region’s beauty, and allows them, for a moment, to lose themselves in their cups.

“One day there will be peace,” says Rafeeq Zargar, a local taxi driver, as he drops me off on another quiet day. “No one knows when, or how it will be, but one thing is sure: Everyone will go out on the streets and celebrate. And there will be tea.”